BUDAPEST TIMES
Hungary's transformation through a Brit's eyes
When Marion and Paul Merrick drove from Britain to Hungary in 1982 to spend a year in the country they decided to travel via East Germany and Czechoslovakia. The oppressive atmosphere and the belligerence of officials they encountered in those countries nearly made them turn back, but their worries were dispelled when, crossing into Hungary, smiling border guards waved them on without even asking them to get out of their car. As it turned out, they are still living in Hungary today.

Maybe it was that border experience which coloured their impressions from that point. It could have been a chance experience but, as Marion Merrick records, over the years a number of chance occurrences induced them to stay in their adopted country and to eventually regard it as home.
What once wasn’t
In 1982 Hungary was a land in which most flats were rented from the local authority, where shops closed for the weekend at around 1pm on Saturday afternoons, where there were hardly any colour televisions, and even the black-and-white ones had no programmes on Mondays. Bureaucracy could sometimes, though not always, represent a nightmare. It was a different world, not only compared with the one they had left behind, but with Hungary today. In those days the concept of ‘consumerism’ was literally something quite foreign: today it seems to define much of Hungarian society. Marion Merrick conducts us through personal experiences that she and her family had as times changed.
Could do with more
The book is in two parts; the first, which was originally published in 1998, covers 1982-89, while a new section takes us up to 1996. Those who have already read the original part may be a little disappointed, however, as the latter section is around half the length of the first.

Nevertheless, it is a pleasure to read Marion Merrick’s  very well written and easy to follow text. You feel you are right there yourself as she ‘tells it how it was’, amid the minutiae of everyday life. It is almost like reading a novel, or a collection of short stories. But these are real stories, reflecting the changing years through the author’s eyes.
This is not a detailed political history of the periods in question, but you do get some insight into what might be called political ‘atmosphere’. There is an interesting account, for example, of the big May Day celebrations in 1984. Some people seemed more interested in beer than the music and exhortations coming from the loudspeakers. Much later in the book we get a feel that – in a different way, but perhaps once again – things are not quite what they might appear to be on the surface, or what ‘officialdom’ would prefer us to believe.
Right at the end there is a striking description of Moszkva tér – peasant women in multitudinous skirts selling flowers, gypsies hawking umbrellas, foreign workers hanging around hoping for a casual job, barely noticed by the new breed of insurance clerk and office worker in suit, tie and shiny shoes, rushing past them for the underground, just as sleek cars stream by as alcoholics and unemployed search for cigarette ends.
If the Merricks were asked whether they’d do it all over again, I suspect they would say yes. As the book reveals, they’ve experienced a lot and times have certainly changed – cross today and you might not even have to show a passport at the border. 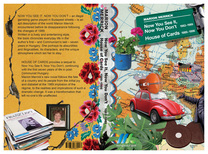